A kitchen in the west of Ireland, home to two ill-compatible brothers, haunted by the alcoholic parish priest and supplied with booze by an enterprising schoolgirl: such is the scene that unfolds to the audience in the current production of The Lonesome West at the Burton Taylor Studio. The atmosphere of this play by Martin McDonagh may seem familiar to those who saw The Lieutenant of Inishmore at the Keble O’Reilly in Michaelmas 2017; but the action is more concentrated and claustrophobic: long-held grudges, old secrets and failures to communicate fuel the wonderfully tense dynamics between the play’s four characters.

Father Welsh’s crisis of faith – ‘it seems God has no jurisdiction in this town’ – serves as an introduction to the many (and often bizarre) issues that make for a complicated parish life. Murder and suicide are casually turned into backdrop for the real action, the smouldering petty conflict between the brothers Coleman and Valene, with young Girlene, full of teenage wit and anxiety, lurking on the edges. This dramatisation of small-town frustration is quick to remind you that it springs from the same mind as In Bruges and Three Billboards Outside Ebbing, Missouri: McDonagh’s satirical talent manages to keep the play well-poised between tragedy and comedy; his characters verge on being caricatures, but are not so overdrawn as to make psychological interplay impossible. 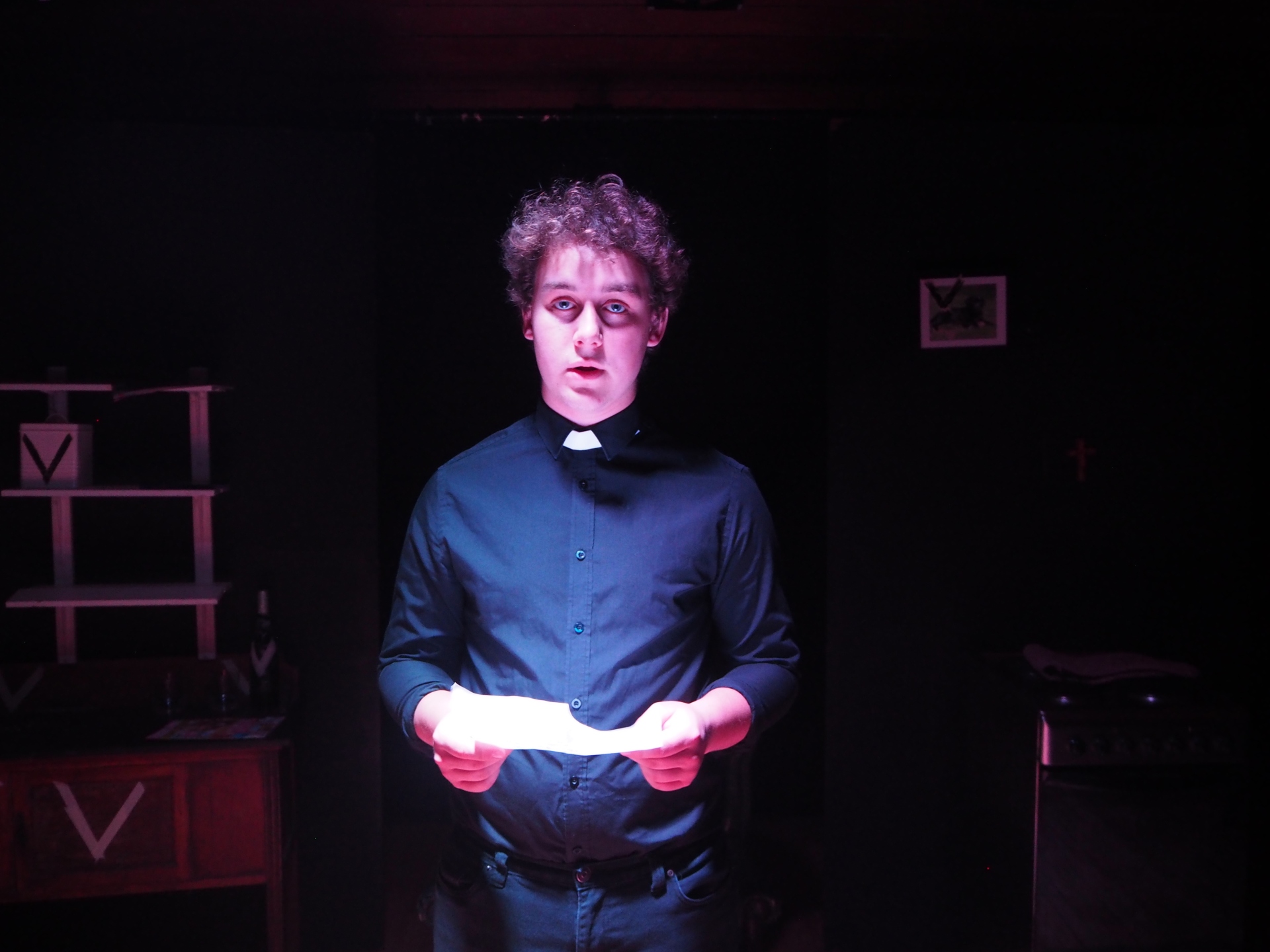 This interplay is convincingly acted out onstage, in accents varying from the impenetrably thick to the more viewer-friendly superficial. Caleb Forbes as a psychotic Coleman finds an excellent foil in Roman Marshall’s neurotically petty Valene; the lethargically depressive Father Welsh, played by Caleb Barron, quietly attempts to control the scene, which is shaken up by Lara Deering’s impressive display of pent-up emotions as Girlene. Even though the play has a small cast, it never feels empty due to its actors’ stage presence, which brings complex character dynamics alive.

The intimate feel of the Burton Taylor Studio, with barely 50 seats, allows the audience to follow interactions from up close; so does the interesting decision to stage the play in the round, having rows of seats on three sides of the stage. With actors visible from several angles, the play oscillates between a mad circus show and a reminder that such shows happen daily in our very midst. The ability to closely follow the actors’ play of facial expressions whenever they turn to face you is a rewarding bonus.

Niamh Calway’s set design is conservative yet effective, reproducing the simplicity of an old country kitchen; it just provides a space for the human drama to unfold in, a wall-less space that slowly expands to include the audience. It is also a space that can remarkably easily be transformed with lighting and subtle sound effects in order to follow the play’s characters. The audience is quickly drawn into McDonagh’s bleak world, which is not dominated by sets but by personalities. 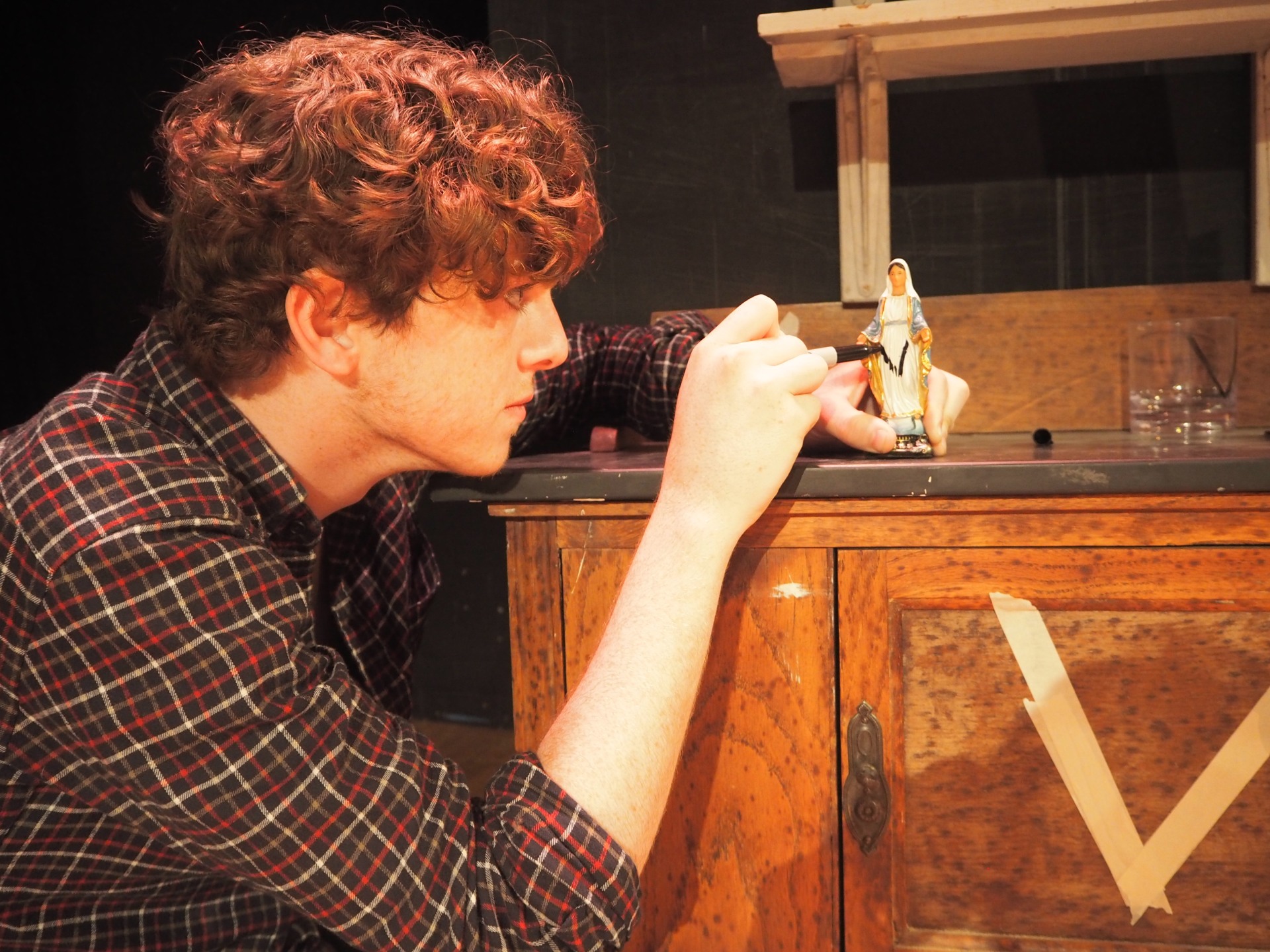 Overall, this is good work on the part of the co-directors Joel Stanley and Joe Woodman, who have created a fluid and entertaining production; The Lonesome West emerges as a both farcical and moving story of solitude, resentment and (possible) redemption that ultimately does not so much end as fade: for some things there can be no proper conclusion. But it is definitely worth finding out what these things are: all you have to do is get tickets for one of the remaining shows; the play runs until Saturday 12 May.