Investigative journalism by Alex Waygood. Featured image by Out Of The Blue.

Out Of The Blue’s recent Christmas single, ‘Merry Xmas Everybody’, is as fun, frivolous and festive as ever. And yet, watching it, I couldn’t help feel as though there were something missing. Namely: where did the gay go?

Out Of The Blue’s music videos have a proud tradition of homoeroticism, but their Christmas single videos have always stood out from the rest. Yet their latest, at first watch, seemed hardly homoerotic at all. Was I correct in thinking so? Or was I just imagining things? I turned to hard data (no pun intended) to take a closer look (also no pun intended).

Trawling through Out Of The Blue’s Christmas music videos, I assigned each second in each video a homoeroticism rank from 0 to 4. Each ranking was defined as follows:

The results of my somewhat dubious data gathering can be summarised in the below chart: 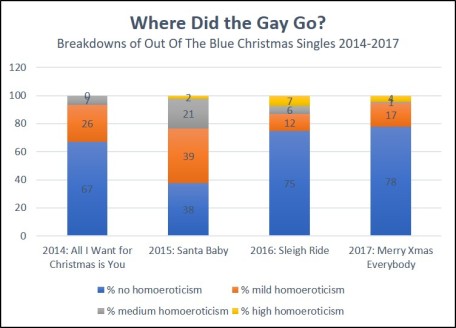 As we can see, after the success of ‘All I Want for Christmas is You’, the boys decided to go all out in 2015 with ‘Santa Baby’, a video in which the majority of seconds in the video feature content that is at least slightly homoerotic. Moreover, ‘Santa Baby’ started off a three-year streak of Christmas singles with involving shirtless OOTB members (content marked as ‘highly homoerotic’ in the chart).

And yet, and yet… one shirtless scene does not a homoerotic video make. As we can see from the chart, although ‘Sleigh Ride’ and ‘Merry Xmas Everybody’ have a greater proportion of shirtless scenes than even ‘Santa Baby’, it’s almost as though Out Of The Blue were paying lip service to homoeroticism without fully committing. Both singles in fact featured a greater proportion of seconds with no homoerotic content than 2014’s ‘All I Want for Christmas is You’. And it looks as though it’s getting worse: the proportion rose from 75% in 2016 to a frankly shocking 78% in 2017. Meanwhile, 2017 also featured the lowest proportion of seconds featuring ‘medium homoeroticism’. Those few shots of JJ Gibbs’ chest are pretty much all you get, lads. 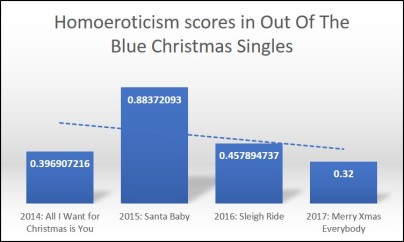 The Spearman Rank Correlation Coefficient between the two variables is -0.33575522, indicating that the two variables are fairly weakly correlated. Yet any correlation at all is frankly unacceptable. And this is just comparing Christmas singles (for the sake of like-for-like content). Include such fare as 2014’s ‘Hips Don’t Lie’, and the correlation would surely be far stronger.

Out Of The Blue are just not as gay as they used to be. Sad!

Readers with too much time on their hands can download the full data as an Excel spreadsheet here.

All Out Of The Blue singles mentioned in the article were raising money for Helen & Douglas House hospice – read about the work they do here.